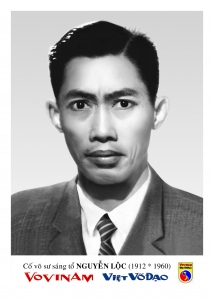 Vovinam Việt Võ Đạo was founded by grandmaster Nguyễn Lộc (1912 – 1960) in 1938. Founder Master Nguyễn was born in Northern Vietnam, ThạchThất District, SơnTây Province (now ThạchThất, Hà Nội). Growing up in the French colonial period, as a young man Nguyễn Lộc was hurt to see the younger generation being affected by French authorities with Western games, causing a decline in patriotism and combat power, weakening their minds and making them forget that the country was being ruled by foreigners.

Since being a child, Nguyễn Lộc had practiced martial arts. With a sharp mind and enduring spirit he had achieved a high level in this field. After years of keeping his vision inside, he thought of the way the Vietnamese youth could know about reliance, patriotism, national spirit, a key to open their potential: Vovinam.

Vovinam martial arts make use of traditional Vietnamese martial arts as a base and, added to that, key aspects of other forms of martial arts from around the world. Vovinam uses various techniques created based on the principle of “Cương Nhu phối triển” which means “soft and hard co-development”. In hard there is soft, in soft there is hard. To go hand in hand with martial arts, Founder Master Nguyễn Lộc proposed the doctrine of Mind Body Revolution”, according to which disciples must always shine for themselves, live clean and contribute positively to society. They must not be aggressive but rather be assertive, use martial arts to develop the body and mind, cultivating mental alertness and to put community and country ahead of themselves. That is the goal of Vovinam Martial Arts.

Vovinam became known as Vovinam – Việt Võ Đạo. Vovinam is easier for non-Vietnamese practitioners to pronounce, which facilitated its turning into a global practice. The fate of Vovinam has been up in the air, floating along with the ups and downs of the country’s history. Currently thousands of people around the world practice the Vietnamese Vovinam martial arts every day.